Passover: What Makes Passover Different from Other Jewish Holidays?

Ever few years Passover, Good Friday and Easter fall on the same weekend. This year, as she watched her two-year-old look for Easter eggs in the front yard, my neighbor gently asked me, “So, what’s with Passover? What EXACTLY do you do? Is it anything like Easter?” I started with some of the similarities:

But that is where most of the similarities end.  The differences are truly interesting:

What Makes Passover Different from Other Jewish Holidays?

Passover is Celebrated in the Home

The celebration usually takes place at a meal, called a Seder, and therefore there is no need to go the Synagogue. Much of the family is usually congregated in one place—like the dining room table. All festivities and readings are done from a text called a “Haggadah,” which is read at the table.

Family & Friends Participate in the Service

The purpose of reading the Haggadah is to recall the liberation of the Jews from slavery in Egypt. Everyone has a job during the Sedar; in fact the youngest child has one of the biggest jobs: asking “The Four Questions.” The “Four Questions” are actually statements about how the celebration of Passover is different from other days. In my family, it is imperative that the child read the questions in Hebrew and not the phonetic pronunciations. To be allowed to read them means that you have started your Hebrew studies and are no longer considered “a baby” in the family. (On a side note: I didn’t learn how to read Hebrew until I was an adult and therefore have never had the honor of reading the Four Questions.) 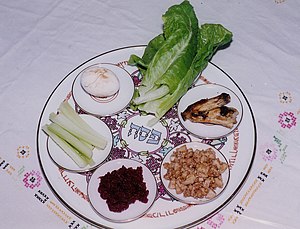 The seder plate is the table’s centerpiece.  Each of the seven foods on the plate symbolize different aspects of the imposed slavery on the Israelites:

Vegetable (Karpas): It is traditionally dipped in salt water. The vegetable (usually parsley or lettuce) symbolizes an old tradition of beginning a meal by dipping vegetables. The salt water represents the tears our ancestors shed during their years of enslavement.

Shank bone (Zeroa) / Roasted Beet: Represents the tenth plague in Egypt, when all firstborn Egyptians were killed. The Israelites marked the doorposts of their homes with the blood of a lamb as a signal that death should pass over them.

Hard Boiled Egg (Baytzah): A symbol of mourning for the loss of the two Temples in Jerusalem. Hard boiled eggs were traditionally considered the food of mourners.

Charoset: A delicious mixture that is often made of apples, nuts, wine and spices. It is supposed to represent the mortar the Israelites were forced to use while they built structures for their Egyptian taskmasters.

Bitter Herbs (Maror): Symbolize the harshness of servitude. Horseradish—either the root or a prepared paste—is most often used. A small amount of maror is usually eaten with an equal portion of charoset.

Bitter Vegetable (Hazeret): This piece of the seder plate also symbolizes the bitterness of slavery. My family places a bowl of salted water as a representative.

The Haggadah actually directs the adult participants to drink four glasses of wine during the service. As my family consistently tries to abbreviate the time spent recalling the Exodus, that’s 4 glasses in less than an hour.  Of course, after consuming that amount of alcohol in less than an hour, some of the family participants get a bit rowdy and decide to share some family stories that are better left in the past.

Because the Passover story is told at home, we are able recall (and even act out) our favorite parts including the recitation of the Ten Plagues imposed on Pharoah.  As each plague is called out, my family dips our little fingers in our wine and place a drop of wine on our plates.

No Bread (Or Anything with Leavening!)

I love bread! But it’s nice that once a year I have an excuse to throw out all of the old bread that has been lingering in the back of the refrigerator just waiting to be made into breadcrumbs. At Passover, it is customary that everything with leavening be thrown in the trash. In its place, we eat Matzah (flour and water) that has been baked for exactly 18 minutes. It’s amazing what can be made out of matzah with a little imagination and time. Crab cakes are DELCIOUS with a matzah meal base. (Yes, it’s true that crabs, by themselves, are not exactly considered kosher according to the Jewish Culinary rules, but I am just making a point about matzahs’ many uses.) Of course, by the end of the eight days of Passover, we are all a bit tired of eating it as our only form of starch but for most of the week it is a great alternate for bread, cereal, pasta etc. Like any Easter egg hunt, this tradition is really focused on the children participating in the Seder. At the beginning of the Seder, half of the middle three pieces of Matzah (called the Afikomen—which also means “dessert” in Aramaic) is hidden. The Seder service concludes ONLY when it is located by one of the children. The child may “sell” the Afikomen back to the Sedar’s leader. Usually the payment is a new toy or, in my family, five gold dollars. Allegedly, the custom aims to keep the children engaged throughout the entire service and interested in Passover traditions. However, having been the seeker and the one hiding the Afikomen, I find that it is really more rewarding to be one of the adults steering her favorite child towards the matzah before any of her bigger cousins ambush and steal it away from her. After explaining these seven customs to my neighbor, I was surprised to learn two things: first, she was actually still awake and listening to me and second, that she wanted to participate in a Seder. She explained that having listened to the yelling and singing coming from my home last Friday night, she wanted to be part of the party too. I can think of no better guest. After all, the Haggadah notes: “Let all who are hungry, come and eat.” The welcoming of guests to the Seder table is actually a central Passover tradition and in our neighborhood, that could be a lot of people at the table next year.