by MomItForward Jyl and Carissahttp://www.blogger.com/profile/[email protected] on February 3rd, 2009 | 7 Comments »

You had to think about it didn't you? 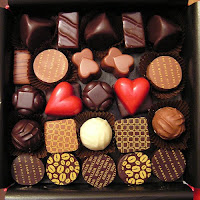 Chris Perrin Guest Posts Today for Mom it Forward. He is a professional food writer who lives and writes in Overland Park, KS (a suburb of Kansas City.) His passion for food began when he cooked in the kitchen with his father who still is a wonderful cook. He uses the kitchen as classroom, therapy, science lab, and a way to connect with his wife and son. (He's also our first Male Guest Post!) You can check out his writing at Blog Well Done.

The answer to this question is more important than you might think. I knew I was going to marry my wife shortly after she told me that loving me was slightly better than eating Oreos. I had recently come to the decision that I would rather be with her than watch Star Wars, so, too, had come to realize what we had was Real. Still, the fact that we could watch Star Wars together and eat Oreos made us both feel a lot better about the journey ahead of us.

With Valentine’s Day approaching, millions of people in the Western World (not just Americans like me, but French, Dutch, Swiss, English, and so on) will be hitting the stores looking for the perfect chocolate gift for their significant others. This search will be undertaken by guys because showing up without chocolate is grounds for sleeping on the couch and by the gals so they can eat what they got their guys.

It’s also important because chocolate and love just seem inextricably linked. It’s partially a cultural thing. It’s just tradition for Westerners to give chocolate to the ones they love. It’s also a culinary thing. Think of the most decadent, rich, creamy dessert you’ve ever had and nine-times-out-of-ten, it’s made with chocolate.

You may have already heard, but it’s a biological thing, too. You ever eat chocolate and feel better? That’s because chocolate releases endorphins in the brain, chemicals responsible for your sense of well-being and happiness. They’re the same chemicals released during sex (and also when you do heroin and eat dill pickles, too.)

Most importantly, though, chocolate is a girl and a guy thing. It something that couples can enjoy together as a fondue, something to dip strawberries in, a must-have for cookies, or an ice cream. Since, I’ve always believed that couples (and families) who cook together stay together, a rich chocolaty cake or even a basic chocolate chip cookie is great relationship glue: something that can be made, and then devoured, together.

So now that you’ve had time to think about it. Which is better love or chocolate? Maybe it’s love, maybe it’s chocolate, and maybe it depends on the day. Chocolate can’t break your heart, but it has had difficulty saying “I love you” since the 60s. Love is a blessing, but it’s difficult, too.

You know, either way you answered, this Valentine’s Day and for every day the rest of the year, I hope you have lots and lots of both.